Here is a build of a really powerful VESC. It uses 600V 600A IGBTs for the powerstage and its compatible with the latest vesc 6 firmware and vesc tool. 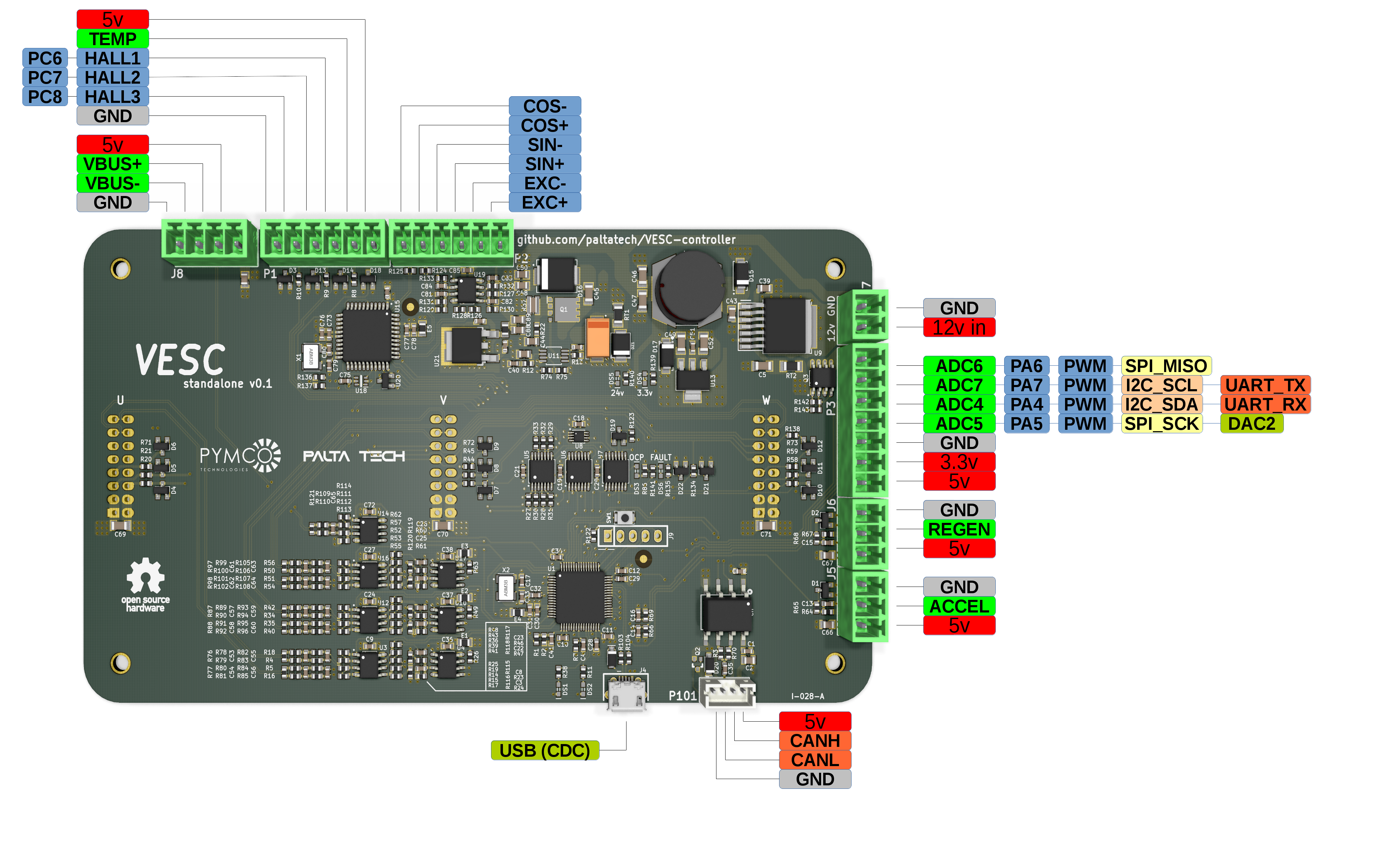 So if someone is interested in high power this thread is a good place to start.

What purpose this VESC has been designed for ?

Did you have to adjust the deadtime to deal with the IGBT switching at lower speeds?

What purpose this VESC has been designed for ?

Can't tell., but I hope it can also run a car

I'd love to build a DIY car.

Joke apart, be careful with the trademark now.

Did you have to adjust the deadtime to deal with the IGBT switching at lower speeds?

Yes, I calculated 1.2us but its running 1.4us. The original vesc is something like 70ns.

Benjamin exposed the deadtime setting, line 204 of the configuration file of this board

I wrote a .c code to calculate the actual register value, its not a simple calculation and a wrong dt setting can blow the inverter, so I sent it to benjamin a while ago, hopefully he can integrate the code in the GUI. Ping me if you need that code.

This board also has some hardware fault protections in case anything goes wrong, so it also needed some custom code to unlatch the protections if they are triggered

Joke apart, be careful with the trademark now.

Yes, no problem on my side if vesc requires me to change the name, I had to build this with an impossible deadline so the name was the least of my concerns at that time. However, I do wish this is as official and vanilla as possible, I spent a lot of time doing things the right way so the hardware is fully supported by a vanilla code.

How do you receive email notifications from this forum?

I have only notification for Private Message.

Which MCUs were you looking at with sigma delta support? I would be interested in a VESC port to a MCU with sigmadelta and high res PWM, even if we needed to pay someone to help with coding I would be willing to donate some funds. The only problem I always run into is trying to find anyone with chibiOS experience to work on anything VESC related.

"The only problem I always run into is trying to find anyone with chibiOS experience to work on anything VESC related."

Same problem for me.

I found ChibiOS quite easy to deal with. What is HARD is the motor control part of the code, I barely had the courage to tweak minor things in benjamin's code to suit my needs. A single misplaced C code line can wreak havoc and destroy a very expensive system.

Having said so, I'd encourage you to stay away (far, far away) from a MCU port. Your code base will branch away from benjamin's and you won't be able to keep up with his changes and improvements. Its not easy to get it running to begin with, but maintaining and keeping track of benjamin will become impossible.

Thats why my only chance to approach a digital sigma delta is using an external FPGA, thus avoiding MCU changes, and integrating security and fault tolerance into the FPGA. Such an expensive drive unit can't blow up with a firmare bug, thats why the FPGA.

Therry asked for the code, I'll post it here when I get home.

Here it is, you set the  deadtime_ns variable to your needs. VESC operates by default at 168mhz.

Thanks for that quick answer!

I am interested in making VESC6 firmware work with something like AMC1303. But to get 12 bit accuracy you need sample 8us. How current looks trough one pwm period on phase shunt. Is there a lot of change?

I want to drive a VESCed Sportscar in 2018! Frank

I am interested in making VESC6 firmware work with something like AMC1303. But to get 12 bit accuracy you need sample 8us. How current looks trough one pwm period on phase shunt. Is there a lot of change?

Besides accuracy you need FAST response times. You either use the AMC1301 and convert from differential to single ended like I did on this build, or you convert the delta sigma to voltage using analog filters, or you design a digital filter to get a useful adc value. I don't think the STM32F405 alone would be able to compute that delta sigma at 20MHz clock.

I was thinking about using STM32L496 or similar. It should behave same as STM32F405. It have regular and injected channels.

In the first paragraph of its description it says 80MHz cpu. Are you willing to cut your clock frecuency by a bit less than half, reconfigure *every* clock (timers, prescalers, deadtime, usb, pll, etc)?

Who knows what else is not compatible with vesc firmware, and even if chibios supports it. Usb libraries are a nightmare on their own, even when chibi's are one of the best written out there.

In my case I want full sigma delta signals, so I need 7 filters and those MCU have only 4. I think an fpga is the best choice.

Good point, I got one FPGA board from school times so maybe I'l give it a try.

Good point, I got one FPGA board from school times so maybe I'l give it a try.

Here I posted what I think it needs to be configured in the fpga. Let me know how it goes, when I get some idling time I want to try that verilog code.

Wouldn't be easier putting STM32L476 and use it only for filters? It has 8 inputs and 4 filters. Or maybe two of them.

Wouldn't be easier putting STM32L476 and use it only for filters?

In the first paragraph of its description it says 80MHz cpu. Are you willing to cut your clock frecuency by a bit less than half, reconfigure *every* clock (timers, prescalers, deadtime, usb, pll, etc)?

Who knows what else is not compatible with vesc firmware, and even if chibios supports it

Oh, sorry, and sorry if that came out rude, I'm lazy writing on the phone.

That is a doable approach for sure and would require minimal changes to the vanilla firmware. Its especially good if you never used an FPGA, they have quite a learning curve and its more common to know how to program a mcu.

I'd still go for the FPGA/CPLD because I can process all 4 voltages, 3 currents, and monitor for PWM shoot through and several fault conditions using HARDWARE. Firmware is often not considered rugged/reliable enough for some applications. You would develop a simple and reliable HDL that makes sure nothing blows up by standing in the middle of the PWM itself (cant do that with an MCU), and it makes your main mcu firmware testing easier. Without this a single-line firmware error can destroy your build, which I suffered last year.

I tried pulling the design of github.  Everything seems to be ok but I did encounter 2 problems (and they may be related).  The system can't find the library "/home/marcos/paltatech/tools/paltatech.lib" and was wondering if I could get a copy to relink into the design.  Also when I add the netlist there are 339 missing footprints, which may be from the library file that's missing.

Thanks for your help in this.

I want to thank you, paltatech for this stunning project.
Browsing the Github files was a real inspiration for some ideas
in filtering the sensor information and such.

Although Im aware that porting and maintaining the Vedder firmware
on another hardware is huge, but I am tempted to give it a spin for the filters.
Theres still my Artix 7 board floating arround :)

Is there a notification if you recieve a PM ?

@antonchromjak  any chance you revieve any PMs from my side ?

Hi Jens, PM me anytime, its the only chance I get a notification. By sheer luck and curiosity I checked the forum, its been like 2 weeks since I polled this thread.

Do you want to add an fpga or remove the STM32 and implement *everything* in the fpga? One is a month away, the other is more like a year away ;-)

antonchromjak answered in his thread on older forum:

@Palatech, thank you  i will point a pm yout way.

@parasole  Thanks i am back to the old thread. Would be nice to get the mini one working.

isn't 3us delay of AMC1301 problem? wouldn't be better to use hall sensor? they have similar delay.

The benefit of the AMC isolator is the differential signaling, which provides higher noise immunity and the option to use digital signaling (changing part#).

Other than that, yes, its just a current->voltage transducer like any other.

I'll leave this here and walk away

STOP TEASING US AND GIVE US MORE! (please)

how you solved that there is no power for AMC 1301 at start until some of lower fets is conducting?

Sorry, I dont understand. In my boards the AMC1301 has its own isolated dc/dc converter that is always powered. You sound like using bootstrapping, I'd avoid that for >10kw.