This is the beta testing thread for firmware 5.02, which will mainly contain bugfixes and small improvements. It would be nice to have some help testing it out. Here is a link to the new VESC Tool with the new included firmwares for all platforms:

So far, the changes are:

"VESC Tool does not allow uploading firmware to all VESCs on the CAN-bus if they have different hardware versions."

Just wondering is this a new feature . . . or a bug that has been fixed?

Updated my Raptor 2 to see if this Firmware fixes some issues.

My flipsky vx 2 remote is not reporting speeds anymore unless i put it on FSESC mode on the remote (Use to be Focbox mode to make it work with unity). -->UART changes ?

The motor temperature sensors are giving weird values. (I'm sure the hardware is fine as it worked on firmware 23.46) both displaying minus 89-90*C

Hello I have an 4x4 unity setup and I had just tried 5.02 yesterday and for some reason one of the two esc's will not pick up the hall sensor on one of my motor but if I flash 23.46 back to it just that one ESC it detected the hall sensors in that motor just fine don't know if this is a problem in the firmware but I figured I do the right thing and bring it to your attention also the original unity firmware when uploading new firmware to it it would automatically turn the unity off but In 5.02 The esc stay on I have to turn it off myself also experienced  after doing a software update and power cycling the ESC I couldn't connect to the VESC tool again unless I closed the program and reopened it I'm using the windows build ( when I was going back and forth with firmware I had the can-bus connector disconnected since the working yes he had no issue didn't see the point of me flushing and messing with that ESC)

Nvm found I have a bad hall sensor in one motor

Hi Guys, I have the vesc 300 and i noticed that the RMS phase current is not calibrated properly and also not linear. For example up to 50-100Amps the values are closer to the RMS measured current, but when i go to 300Arms the current measured is only 200Arms. I have 2 questions here. how to calibrate this to show correct current. how to change the advance angle for sensor less commutation, since I think it can be improved form the encoder test i did. The Power factor of the motor can be improved if i add 30 degree advance angle. The power factor was 0.729. \

I design my own motors.

I noticed issues with the current measurements as well. I thought that was my custom hardware but seems like it can be in the firmware.

However, running full throttle with the the same load, shows batt amps about 25% less than actual draw from the battery. The meter shows 20A and VESC tool shows 14A.

Using FW 5.01 and 5.02 with 4.12 hardware, if you connect 2 or more VESC with CANbus, it has an erratic behavior that can be replicated every time:

If you have two motors connected to the same shaft (let's say, two skateboard wheels on the ground, so they don't have relative movement in between the two) if you accelerate the motors to the max speed, it becomes unstable and it starts dropping the speed to about 50-60% (and one motor appears with negative current - they are both spinning in the correct direction - and this only happens at duty cycle ove 85-90%). This took me a little bit to replicate because when tested on the table, having the motors free spinning (not locked together) it does not happen. But, as soon as you lock the motors together, this behavior appears. I tried the same with hardware 6 and there are no issues, but with the 4.12 it happens every time (regardless the motors or the setup, just locking any motor together it will happen)

When you guys have a little bit of time, maybe you can look into this so you make your firmware suitable for users with both 4 and 6 hardware.

Thanks again for your good work.

I noticed similar erratic behavior @Filcas even without locking motors together on FOCBOX UNITY with FW 5.01. For me it only happened when using FOC without sensors.

Any chance to get an updated build that includes the current stuff from git?

Im keen to test some of the new IMU stuff that was added a few weeks ago.

@Filcas several reports from https://forum.esk8.news confirm negative motor current for one of two motors in realtime data. I suspect this pull request was the reason https://github.com/vedderb/bldc/commit/dea04a5e229aab05b89c268a1b9e760eb8043f28

Can confirm. Im also seeing this issue. Motor with direction inverted is reporting negative motor currents in both metr and Vesc Tool.

Im also seeing an issue where changing any setting from metr is messing something up in the VESC. The stormcore RGB light stops working and i cant make settings changes from the VESC tool. seems like doing a settings reset on the vesc fix's things.

The current sign should be fixed now. Also merged the latest balance update.

Setup:
individual 3.3V supply for the vesc and target(diebiems)
Ground shared via SWD interface.
RST not connect as it yielded instant crash.

ended up with this: 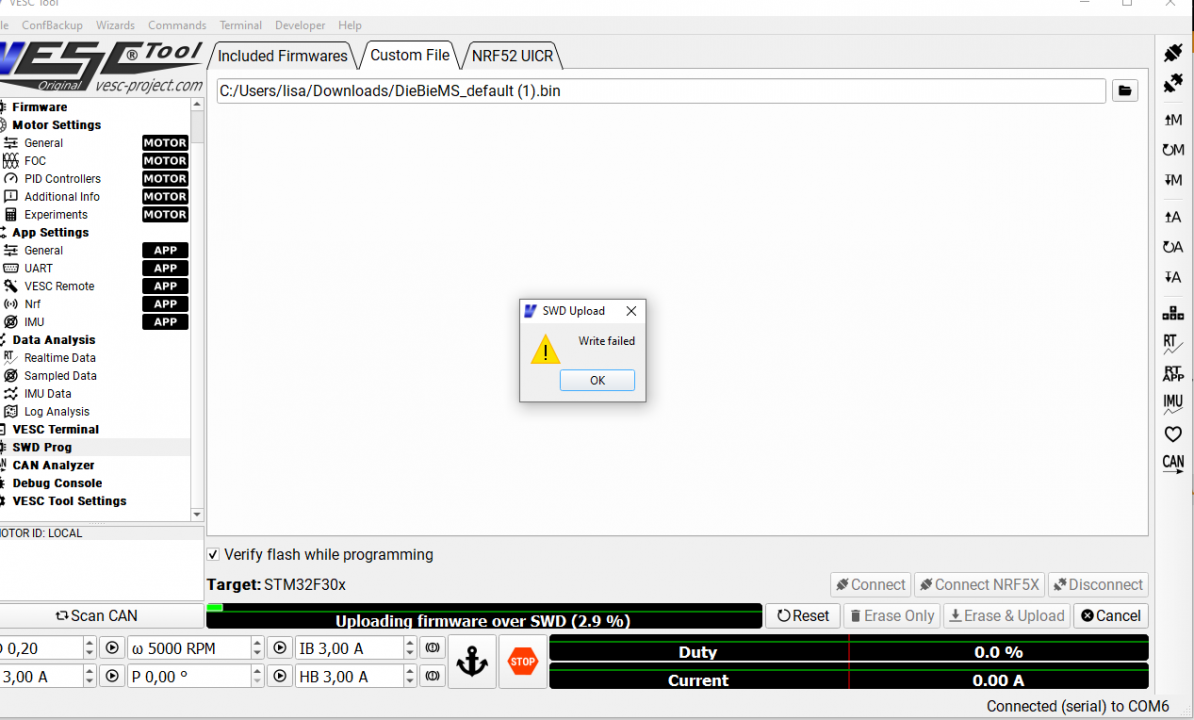 I would like to add this here for discussion, as it might be relevant information for the project and also for this forum users.

Resuming:
4x motors all connected together to the same shaft. Motors are running FOC and they are just normal 190kv BLDC sensored, using 12s battery.
Control mode is DutyCycle (we can’t use current control as we need to precise control speed with and without load). I have them all connected with CANbus using 4x HW6. Master setting is with PPM, slaves NO APP and they run OK using PPM receiver.

But, if I pass 90 to 100% of the throttle, I have this repeatable behavior of having the motors locked at full speed. Sometimes it stops at about 4 to 5s, other times I have to unplug power to make this to stop. This happened to me before while using HW4.12 but it was random (I posted something about this before on this forum). Now I can replicate it and I can’t figure out the issue.

Here the link with some tests and possible solution (none of them working yet).
https://forum.esk8.news/t/locked-at-full-speed-out-of-control-multiple-motors-with-same-shaft-ppm-app-issue-over-canbus/38182

Do you guys here have any comments on this? It would be really coo to have this sorted.
Thanks.

i had some similar problem. Quick test: Send the throttle signal (in your case the target dutycycle) with an extra VESC. Make shure it has short PPM cables and is far away from the high current cables. Connect it to the CAN-bus. This will make sure that the master VESC has no EMI on the PPM-signal superimposed.

Thanks for the suggestion.

Just tried it with 5 vesc, one of them (master) far from the assembly connected through canbus and not driving any motor.
As soon as the other motors reached over the 84 to 85% dutycycle, they locked at full speed!

Current control does not have this issue, but I really can't use these control mode as I need to control well the acceleration and be able to keep the throttle imposed speed.

I think I played already with pretty much all the settings and also changes between several HW6 and I really don't know what else to do to solve it.
Other people are also having this issues and I had this also with HW4, so it must be something we can solve.

Thanks again for the suggestions. If someone have any other new ideas, just throw them here, I will test them right away.

with  LSM6DS3 IMU support.I would like to knwo if there are the possibility to control the speed of the motor ?

I posted this on the other forum, but I think this info is relevant for this FW version and I can have it replicated also in previous FW versions, so I'm repeting posting it here.

So, I’ve been playing around to get some more inputs on this subject of having the motors locked at full speed with duty cycle control and it seems it’s really nothing related with Canbus communication or interference on the lines or any of those things.

Current control does not have it, having a separated vesc with PPM receiver (far from interference) does not solve it and I can see with the VescTool all the inputs from the remote are still responding well while locked at full speed.

I did tried PID speed controll and the motors don’t get locked at full speed. I just didn’t switched already to PID because the slave motors keeps jittering and whining a bit while no throttle input, which is not pleasant to se all machine shaking a bit while in idle (any ideas on how to remove this behavior?)

Other things that might be relevant to this discussion: 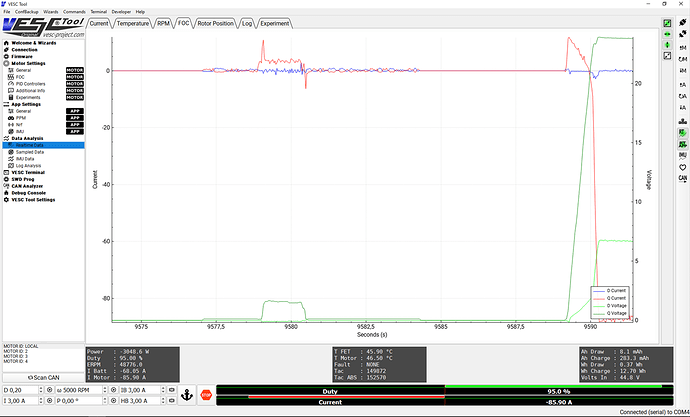 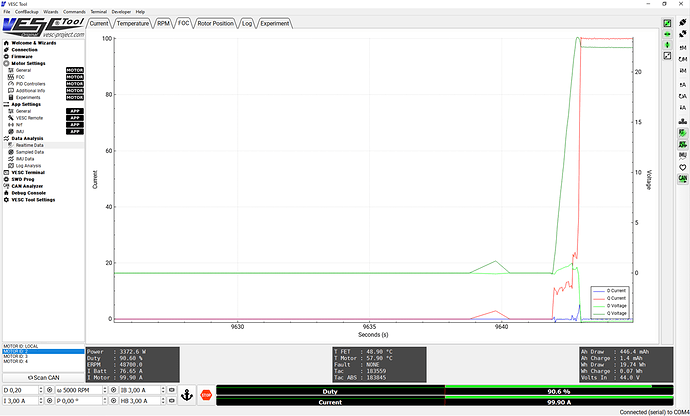 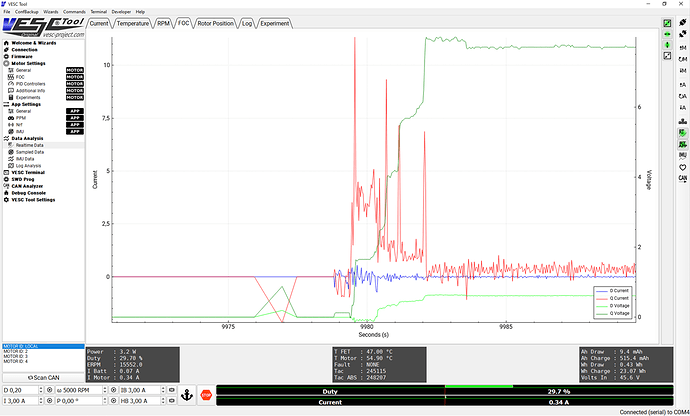 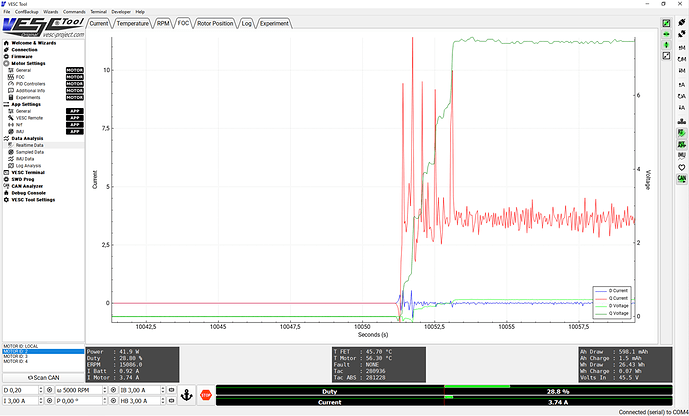 So, I don’t know what else to do to have this sorted, but I would really like someone with deeper knowledge on firmware to give some input on this.
I think I can go with PID speed control if I solve the whining issues, but I think this Dutycycle thing would be interesting also to solve, as dutycycle is straight forward and does not require to mess with PID settings that can take a while to figure out.

Thank you again for all the inputs. If you guys wanted me to be making more test, let me know, I will try everything until we can find a solution.

Not sure if this is a bug or not, I can connect to my stormcore 100s on the latest firmware 5.02 beta 6 on Bluetooth on my android phone. But trying to connect through Bluetooth on my laptop or desk (that has Bluetooth) the scan button just grays out and doesn't do anything. It then becomes unclickable.

Do you know if something is being done on new firmware and if there is a possibility to have this duty cycle issue solved? If there is any beta versions out there, count on me to test it as I can't help on coding, so I just can volunteer myself to test it. Thank you.

BTW, acceleration control mode would be so good if it could be implemented on further versions. Not sure if this is simple to achieve, but is for sure something that will suit people with devices or machines with 4 wheels traction, rails or any other multiple motors locked with same rotational speed.

Just gave it a go with the last built , but still having this same issue with locked at full speed with duty cycle control

@benjamin, any advise you can give us so we can narrow the options to solve it? Thanks in advance.

@badname having the same issue as you, cant search for any bluetooth devices to connect to, the scan button just grays out.