Weird behaviour on overcurrent : have to reflash then FOC doesn't work

We've been using a FOC 75/300A from Trampa as a starter motor on a special application. We're using a big outrunner (10 pole pairs) and a AS5047 encoder.

Everything had been going -kinda- well until we started upping the phase Amps (going from 120 to 200, still well within spec) and then all of a sudden the VESC seemed to have "lost" track and produced loud growling noises and shut down.

At restarting, the VESC wouldn't work at all, when I tried to control it through the VESC tool using the UART apply, it would maybe apply a bit of current, just enough to make a small ticking noise then stop...

No amount of motor detection, even applying manually the settings would do... The only way was to reflash the firmware then reidentify the motor and tweak parameters here and there (as before).

Now, this behaviour had already happened on the bench when I had only part of the engine (and thus part of the torque) driven. At one point, I tried with too much of current and it somewhat "lost" sync / track, made loud noises and the only way to have a working VESC was to reflash the firmware.

EXCEPT this time, it won't work as before! No matter how much I reapply the old settings, tweak the observer gain or up the switching frequency (it's a very low inductance motor). Past a certain duty cycle or current, it will completely go crazy and sometimes a super loud hissing noise before shutting down. It will start and run OK up until 7% duty cycle which is already driving the motor past the sensorless RPM point. Going to 8% will make the motor go crazy.

When the VESC loses track, the phase and FOC currents also go berserk...

I sincerely hope somebody have some feedback on this because we're at a loss... It's as if the motor OR the Inverter had been damaged by something but apart from that very brief overcurrent (which was also something that happened before even though we were far from the ABS current limit) and the loud noises, we really haven't touched anything on the motor and Inverter...

Thanks to all of you!

Sounds a lot like you have damaged something, for low inductance motors if something goes wrong it can very quickly damage the hardware if it doesn't react in time. So keeping response times fast is very important. ie keeping switching frequency high, small time constant on FOC pid.

The 75/300 has been shown to work with some very low inductance motors so it shouldn't be an issue.

Was the motor running smoothly at the lower current before you had the problem?

Are you sure the encoder is working properly and setup correctly? When you get to the 7% duty cycle is the motor spinning already or not? If it is spinning is the ERPM when it hits 7% around the ERPM you set for the Sensorless ERPM on the Encoder page? See picture below. If it is then you might want to get the motor working properly without using the encoder first then move on to using the encoder. (If the VESC cannot figure out where the motor is when it switches over to sensorless then it can lose sync and go mad) 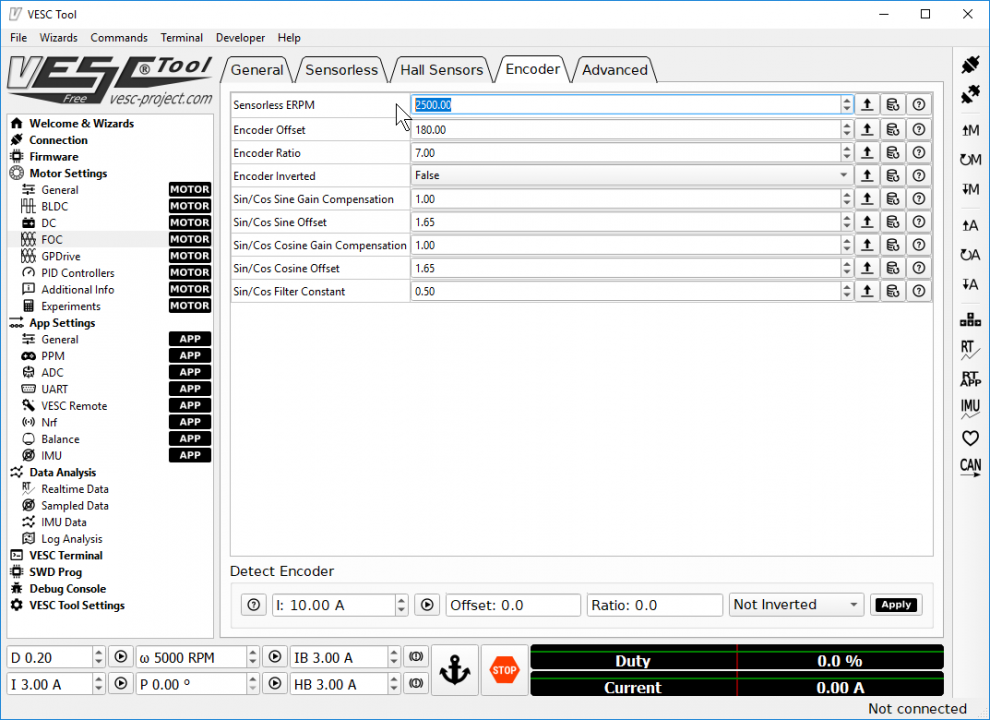 Thanks for your answers, will try tweaking

We've since had some developments :

Now that we can (kinda) reliably use the motor, we had been running some high current tests and we're now facing another problem :

Any idea of the problem behind those two weird behaviours?

Thanks for the help!

I think I am facing similar problem (the speed related wobbling) which I think probably originates from inaccurate PID parameters. I don't know exactly what the applied model uses for controlling, maybe it could be possible to extend motor setup run by further testing. I am thinking about a higher duty and transient testing automatically to (better?) estimate motor inertia. With 2 known added inertia even true motor power (thus efficiency) could be calculated just like how some car dynos work.

As for the sparks: I had sparks with one of my NTM rotor drive 510kV motor too. Not quite normal for a brushless motor to make sparks...:) Mine had torn coil wiring and the sparks were created between the loose ends. I was quite amused to find it out as I was still able to ride with it, just some jerks sometimes. However it quickly got torn on another part of the wiring, so it was finally dead. I think it was due to low quality of winding together with high intermittent currents I was using my ebike which resulted in cyclic physical degradation of wire. Are you sure the wire is ok?

But then the next day, the loud growling noise would come back again if we didn't load the motor during it's acceleration. If we loaded it (just with the hand) then it accelerated fine. Also, after a number of starts (motor maybe a tad hotter but not even that much), it would behave consistently fine.

Thanks for your answers.

I did lower the resistance value by 5%, it's still working but I still got this control problem at run-down. Let the motor go to a lower RPM and then put the control back again and control came back on...

The ABS_OVERCURRENT did not go away either.

Been trying to log some datas but it doesn't work (cannot open file), I read that it was a common issue on WIN7/10... Tried logging at the C:/ root but to no avail.

Can you share with us the motor parameters that were detected? Knowing the Resistance and Inductance of the motor would be helpful. (Low inductance motors require quite different settings to run well)

If you haven't already you might want to increase the switching frequency a bit as that tends to help with abs_overcurrent issues. (In the advanced tab under FOC) you can go all the way up to 60KHz if needs be, but it will increase the heat produced slightly.

The other thing I might try is reducing the set motor inductance slightly by about 10% and see if that helps.

As for trying to find what helps the most, best way is to back the motor current down to the point it works correctly then slowly increase it till it just starts to have problems. Then try tweaking things until you can increase the current more.

Also, I'm just wondering why it would do so at speed (it really stops @8000RPM everytime) and not at low speed. The inductance of the motor stays the same over RPM, does it?

Thanks for the help,

has there been found any solution for this issue? I may have the same problem :/