The VESC 75/300 is now available for purchase. Benjamin is very happy with the final tests and we can so no reason to hold it back any further. The performance is beyond any expectations. If you have projects that require higher output power do not hesitate to pre-order your VESC75/300. This is a limited volume production run of 100 units. First come first served. PCBs will be RED with golden VESC-Logo.

So if I am looking at it right for its power stage it uses these parts:

I heard Benjamin in the video saying he is using 75v fets? That seems silly when you could easily support higher voltages by just changing to 100v fets. (obviously this falls outside of the low voltage directive in Europe, but it doesn't stop people using 18S and you just label it as a 16S controller)

Great work on the power stage layout, it is really nice and compact. I have been looking at something similar with HSOF8 fets, but they are so big the inductance is always too high. So I am also going to start using DirectFETs as well. Although to continue unofficial support for 18S I will use 100V fets and Electrolytics. Possibly switching to the Allegro hall sensors for current measurements, at which point a 150v version is possible.

Current sense and dc-dc converter options are such a headache above 80v if you're trying to keep it small and need to measure +/- 300A. There's a few buck converters up to about 140V, above that it's mostly flyback converters with 80V minimum voltage. There's isolated current shunt options but they need isolated dc-dc supplies and an opamp to let the stm32f4 ADC read them. You need to find space for 3x isolated dc-dc, 3x opamps and all the passives to go along.

Hey Frank, do you have an update on the 75/300 production?  Itching to get mine in and start playing with it!

Also when is the fimware update that supports 60kHz going to appear, and the new version of VESC tool with all the nice graphing tools and stuff.

Currently you can't run over 40kHz as it just locks up.

It doesn't do magic, the 40kHz limit comes from the time it takes to process the FOC loop and that won't improve anytime soon, that patch allows for much higher PWM by skipping loops, so not ideal if you want to run a 120000 RPM motor.

The latest firmware and VESC Tool is out since yesterday. To run at 60 kHz, sample in V0 and V7 has to be disabled (essentially running the control loop at half the switching frequency). That should be enough to run motors at 200K ERPM, and decrease the current ripple when the inductance is extremely low. The switching losses increase quite significantly when switching that fast though.

What effect do the switched current filters have? I had problems with low inductance motors on my hw, which was more due to layout of the fets.

Does it mean you get less abs overcurrent faults due to lower current ripple? Or just mean tracking of the motor at high current works better? Currently if I go over 150A motor current on a high inductance motor (33uH) then it can't control the motor and just cogs or jumps violently.

The main difference is that the current measurement becomes more accurate at low currents, which in consequence makes the motor start better over a wider range of currents. The new VESC six also has the same current filter switch, and it helped quite a bit too.

It is also possible to get the wrong current sign without load. For example, I have an inrunner that shows -2.5 amps without load with the current filter, and mostly the correct value with the filter (on the V6).

I think I have the same problem. Today I put my 2 Hacker Q80s on my bike with 2x 75/300 vescs and I always got overcurrent abs faults in terminal. My limits were about 300amps and it was cutting off both motors with a blinking red LED, although I was just having no load on the bike. It wasnt even possible to ride the bike. There have never been 300amp, maybe 30amps. I have the feeling the values are wrong. Instead of 300amps, it was maybe just 30amps. The same with maximum Power. After motor wizzard it automatically put 1500000 watts as values, which is weird. There must be something wrong. I used vesc tool 1.00 for windows. I am waiting for an android phone to check the values in the app. I am new to the Vesc world, maybe I forgot something.

You should probably start a new thread about this. It sounds to me like you are pushing the motor too hard, which brings it into saturation.

Also, the watt limit has nothing to do with it. The default value is high to make it disabled, as it is not meaningful for most setups.

I see in the new firmware there are IO pins for current and voltage filters. Does this mean there is also a low pass on the phase voltage divider? Does that help a lot for foc? I've found the filter on the current sensors helpful on my a200s board, even with a regular outrunner.

The current filter are implemented, and help quite a bit, especially for low inductance motors. The voltage low pass filters are not used in the firmware yet. I did some experiments with them, but it was a bit trickier than I thought at first. Will try a bit more in the coming weeks.

Currently the firmware only supports NTC. Another problem with the KTY84-130 is that it is around 1k, whereas the voltage divider to measure the resistance is 10k - that would give quite bad ADC resolution.

I would also love to see support for the KTY84-130 PTC, as this is the sensor built in to my particular motor and cannot be changed. Even if the resolution isn't amazing, it would be truely great to have something!

Just ordered a few KTY84-130, will see what I can do. They seem to be obsolete, but maybe newer motor have compatible PTC resistors.

Just for interest, my motor which includes the KTY84-130 is a submersible ROV / Dive Scooter thruster.
So swapping out the existing PTC for an NTC is by no means an easy nor advisable task. 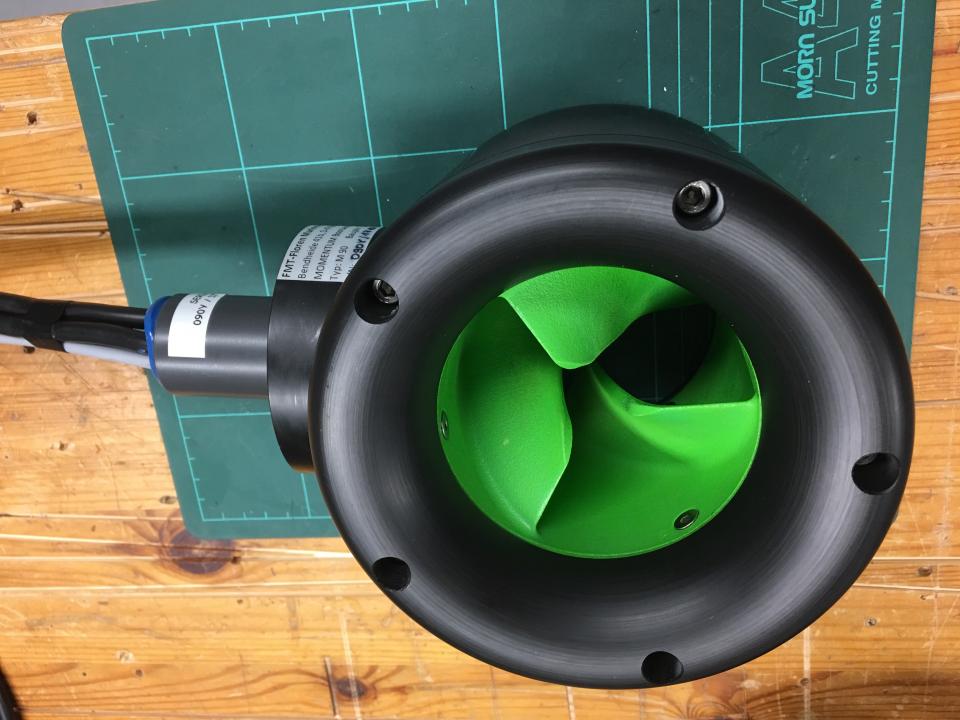 I got the KTY84-130. How are they connected in the motor? Are both cables coming out, or is one of them connected to VCC or GND of the sensor connector?

On my Revolt motors that have the same sensor, there are just 2 wires coming out for it.

Hi, yes that is the same with mine..  the 2 wires come out from the motor.

Can someone please explain the AUX Connector of the Vesc 75/300? There is GND (Ground) and 12+ which I do understand, but what is SIG (Signal) for and how does it work in beeing connected to what? My plan is to use a small fan on that 12V supply which is a need of 0,25A.

Is it possible to replace IRF7759L2TRPBF   with IRF7769 to get higher voltage.

Any news about the KTY temp sensor support?

Looking at the VESC 75/300 Manual it states using "the integration of a FUSE, rated in accordance of your electrical system"

The diagram shows a fuse placed in-line after the battery pack and BMS and infront of the 75/300 VESC.

Any suggestions for a fuse of this rating and for this application please?

Is there also a replaceable fuse inside the VESC 75/300?

Regarding Oliver's previous question about the AUX Connector and SIG pin...
Well I did some tests on mine with my multimeter and I can report as follows:

12V Pin: Provides +12V as soon as the VESC has been powered up
GND Pin: GND
SIG Pin: Switches to GND after the selected startup time in the VESC Tool (2sec, 5sec, 10sec).

I would be very interested to know if event based trigger options are planned for future firmware releases in addition to the startup timer options... ?

@tomarth a suitable fuse is one rated below the burst limit of your battery pack, it is there to stop a fire if something shorts. Suitable fuse would be MEGA size automotive fuse probably 100-150A fuse would be suitable as they don't actually blow until 2-5x rated current.

@qdxiatao you will still be limited by 80v max on the current sensors which includes any spikes.

Any progress on the KTY temp sensor?

Same situation for me, built in non-removable sensor. Would be awesome to be able to use it!

Which would be a suitable "Anti Spark Switch 300A rated" & Safety Cutoff as shown in the manual?

I'm using these ones: https://www.offshoreelectrics.com/proddetail.php?prod=ose-qs10-anti

I'm an idiot. The VESC does support KTY-84 now, I just didn't look hard enough at all the settings. Awesome!

However, upon further inspection my motor has a KTY-83...sigh! It has a 1K resistance at 25 degrees. Any chance of another setting making its way into the firmware?

Yep, I implemented it. KTY83/122 works in the latest firmware.

Hi, where could I find the 3D model of VESC 75/300? It seems like the dimensions in the manual page 7 is incorrect.

I have issues with 75/300. I can only run motor with 20A current, where other ESC can cerate +100 current. Can someone sell remote consulting service to help me?

Mikko: create a new thread, post up your config and some pictures of how you have it connected and people may just do it for free.

Hey Tim, I'm stuck choosing what MOSFET to put at Q19, do you happen to know which fet should be used here?