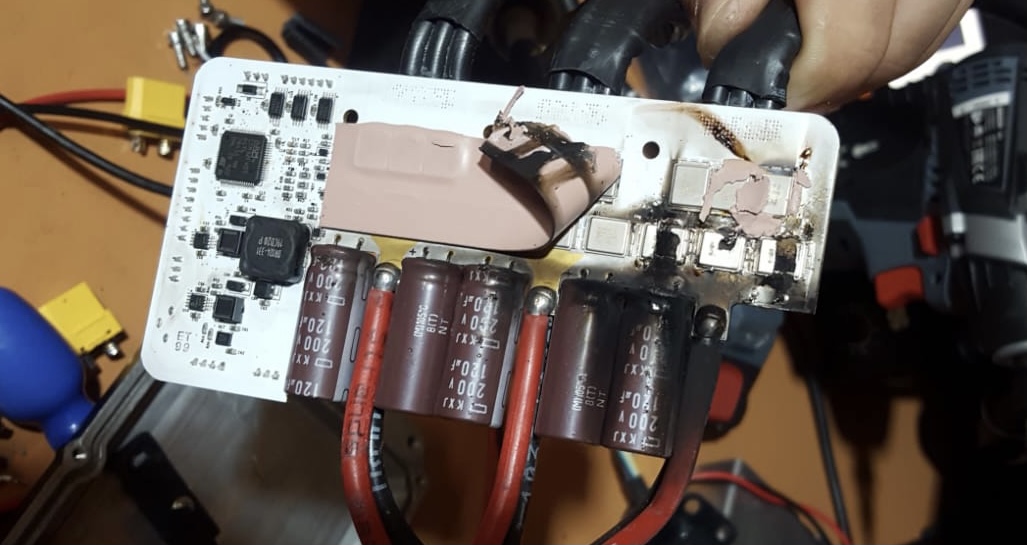 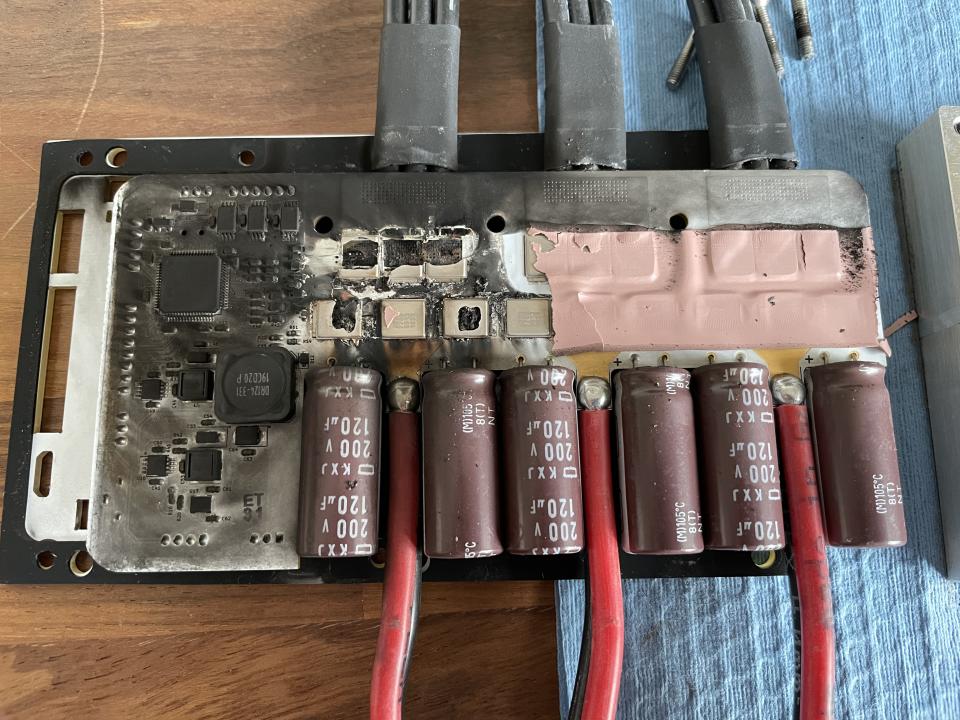 If it is about helping other to avoid burning VESCs or helping to improve the VESC tool, then more context is needed in what circumstances the damage occurred. Thus is would be good if the people who actually burned the VESC post this and explain what they did to help others to avoid that path.

@xenon321 You posted pictures of two burned VESCs that I took myself. I payed for the VESCs. Just because you got the pics, does not mean I'd like them to be published.

Both died on the test bench while working with a MAD M50C35 large brushless outrunner (54 poles, 34 KV, 140 cm propeller) and a big 20S, where the batteries were around 80 Volt. The target setup is a E-PPG trike / land plane aka powered paraglider.

TBH I am in doubt if the VESC is the right controller for large brushless outrunners with lot's of poles, unless you are an expert of tuning in those motors. Using Auto-Detect won't save you from destroying the VESC. A clear disclaimer in that direction might prevent people from burning more VESCs.

If it is just a matter of doing it right then it would be great if someone can share a guild for the VESC on how to carefully tune large brushless outrunners correctly.

If you connect the VESC to a motor, test it in some way and it dies and then do the exact same thing again with a new unit you should expect the same outcome.

One problem with these larger motors is that I did not have many opportunities to test them and make the detection work well with them as they are expensive to buy and making test stands is also expensive and dangerous. So far I got a hold of a few and got all of them running well, but they were vastly different and required different setups.

Currently a T-motor U15 is on the way to me, which at least looks quite similar to this one but is smaller. I will try to get it running well, update the detection if needed/possible and show how I got it running. Then you can try the same approach with this motor and see how it goes. If you, for example, set the abs max current lower and stop the test once you start getting faults you can do it safely without burning the VESC. If the current gets much higher than the limits you know that the observer or current controller is not stable with the settings, and there is not point in continuing without adjusting something. Another note is that you should use a fuse with appropriate rating. The completely evaporated power stage comes from the fact that when they fail and short out, a huge current will flow until something in the systems burns through completely and stops the current flow. It is best to make that something a fuse rather than the VESC, cables or battery.

This is my experience also with tuning, for large motors to get them running well you normally need to do much more manual tuning. The best way is to set the abs max current to only 10-15% above the current limiit, then tune the detection parameters until you stop that from causing faults. Looking at the sampled current data and triggering on faults, you can easily see if the changes are helping or not. Once its tuned to the point it doesn't trigger faults then you can open up the limits a bit to stop random faults occurring.

I have seen a LOT of people having abs max current faults and their solution is to increase the limit! This is the completely wrong mentality and maybe needs addressed with something in the software to calculate what an appropriate limit should be. (If the abs max is set more than 1.2-1.5x the current limit something is probably wrong)

Has anyone created a table of R, L, flux linkage, KI, KP, and observer gain values for different types of commonly used motors? That could help new users see if their detection values were sensible or diagnose detection errors.

>  If you connect the VESC to a motor, test it in some way and it dies and then do the exact same thing again with a new unit you should expect the same outcome.

Sure, but that is not what we did.

We switched to the beta firmware and re-tested only after Frank suggested this would be the next step as you improved it quite a bit. Calculated values were different and the behavior was very different (better inital run up, but unstable at higher RPM, unable to reach the 10kW at all with 13kW on the old one) and we did not get ANY faults until the destruction (we got a few on the old firmware).

Therefore "... then tune the detection parameters until you stop that from causing faults" did not work, as the first fault was fatal. That is actually the main challenge for everyone trying a similar setup and I expect that folks shy away from using the VESC for those scenarios.

Benjamin, as requested to Frank a couple of times: I am happy to send you the motor for testing.

I value you time and a remote session is possible as well. You could get the remote control over the VESC tool via RDP or teamviewer and you can see the motor live on the test bench via zoom or whatever works best for you.