we use a vesc 4.12 (newest firmware) with a big outrunner, driven by a 200 cc honda clone engine to first start the engine and then to generate electricity. 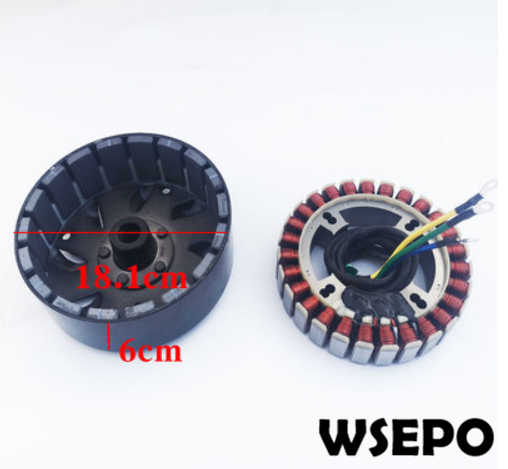 the motor/generator is rated at 5kw and has 27 poles, kv number is not know, its supposed to charge a 24v battery with the engine running 3-3.5k RPM.

besides the fact that the classic vesc is way underpowered (we already ordererd a vesc 6 and might go for the 75/300 :D)  we have the problem that the vesc is breaking without being ordered to.

that already caused one vesc to go up in smoke because it got hotter and hotter, even throwing overtemp warnings and all, but if we dont shut down the engine manually the vesc will charge 10 to 30 amps into the battery with the temp rising steadily.

i don't get why that is happening, shouldn't there be 0 current going from the generator to the battery unless the vesc is actively switching the mosfets? its doing it by itself though, and because it isnt ordered to do so it doesn't stop when the temp gets too high it just goes on until the magic smoke escapes.

it doesn't matter what current limits i configure, and i haven't experimented with freewheeling or things like that that might explain this weird behavior. starting from a rpm of 1500 upwards the vesc is breaking without command and it gets higher with a higher engine RPM. it wasnt a hardware defect either as a completely different vesc i tried after frying the first is doing the same.

someone having an idea what else i could try?

thanks for your time, greetings. Fabian

edit: could it be that the vesc tries to detect the zero crossing and opens the mosfets for measurment, and insted of a zero crossing there is a large ish current inducted because the real phase is lagging or advancing. it is a four stroke engine, so one explosion every two revolutions, which means there is a distinct un steady rotation.

i will install an ams rotational encoder and hope that will solve the problem.

If the voltage at the motors windings is higher than the battery voltage (because it is spinning fast), regardless.of what the vesc is doing it will charge the battery; the body diodes in the mosfets will act as a 3 phase bridge rectifier.