what is the highest battery current the 6.6 firmware will allow? (per motor)

Max battery current or voltage is not firmware specific but rather hardware specific. Can be 1000A or more if the hardware allows that.

vedder mentioned on the old forum the 4.12 firmware overrides battery current limits over 60a... so i wondered if that firmware limit has been changed in the version 6 firmware

Devin, I think you are saying "firmware" instead of "hardware".

The VESC6 and VESC4.12 are different versions of HARDWARE.  For example, the current FIRMware version for the VESC 6 is v3.65, but the current version of the HARDware is VESC 6 mkIII.

If you buy a motor speed controller, you are buying hardware. When you update the software that tells that hardware how to run, you are updating firmware. Firmware is software that gets written onto some type of "read only memory" which then dictates how data flows through that chip. It is called FIRMware because it is not easily written onto a chip. By easily, I mean quickly and repeatedly.  Writing to ROM is commonly called "burning" because the data is semi-permanently imaged into the chip. The process of burning code onto a PROM chip can only be done a limited number of times. I don't know where the state of the technology is these days, but when PROMs first came out, they could only be written to about 100 times tops. In contrast, the memory in a computer RAM chip gets written to many millions of times. What I'm trying to get at is that it is called FIRMware because it is softWARE that stays the same and doesn't change during normal operation which kinda puts it somewhere in the middle of software and hardware. Its not hard, or soft, but it is harder than soft... so they called it firm.   LOL

Now to answer your question, Hardware version 4.12 is limited to 60A because that is what the MOSFETs (the power transistors that drive the motor) can handle. Hardware version 6mkIII has better MOSFETs which can handle up to 100A continuous (150A surge). And to be clear, MOSFETs are hardware components. They can't be changed out for better ones without changing a bunch of other circuitry.

exactly right. now with the 4.12 version, one could enter a higher battery limit than 60a, but I was told by Mr. Vedder because of coding instructions in the firmware, the higher value would be disregarded and 60a used instead.

so i am wondering, with the version 6 hardware and firmware combination, what coded instructions are buried in the firmware...? for example suppose I entered a 10000a battery current limit setting, what value will the firmware substitute instead of 10000a by default as a failsafe?

In the firmware of 4.12, in commands.c, it seems that the values transmitted by VESC-TOOL (formerly bldctools) are simply copied to the config values, without any sort of range checking:

Anyway, if some kind of limit were buried in the firmware, and if you need it for your special hardware, it should be quite easy to change these limits. Did you just try to input high enough value ? (it may also be limitted in VESC-TOOL though  (and also to be modified in the VESC-TOOL sources)..  It is probably much simpler to achieve these little mods  than producing a hardware with much higher Amps capability (but maybe I am missing something..)

I want to calculate the peak mechanical power of a motor for someone with a stock version 6 controller.

in the old forum, when we were trying to determine why the vers 4.12 hardware worked perfectly fine with 200a motor current and 48a battery current settings, I recall the resolution to the dilemma was when Mr. Vedder said the 200a motor current setting was disregarded and replaced with a 120a value as a failsafe, and he also mentioned the same would happen with battery current values above 60a. But I am now unable to locate that post as it seems quite a few posts are missing from the old forum.

When we used the 200a motor current limit setting at the time, it appeared to write the setting as normal and there was no indication other than Mr. Vedder's comment that the limit was anything other than 200a. Unfortunately at the time I didn't have logging capability, nor do I presently own a version 6 controller.

see, a lot of the old posts on the topic are missing... 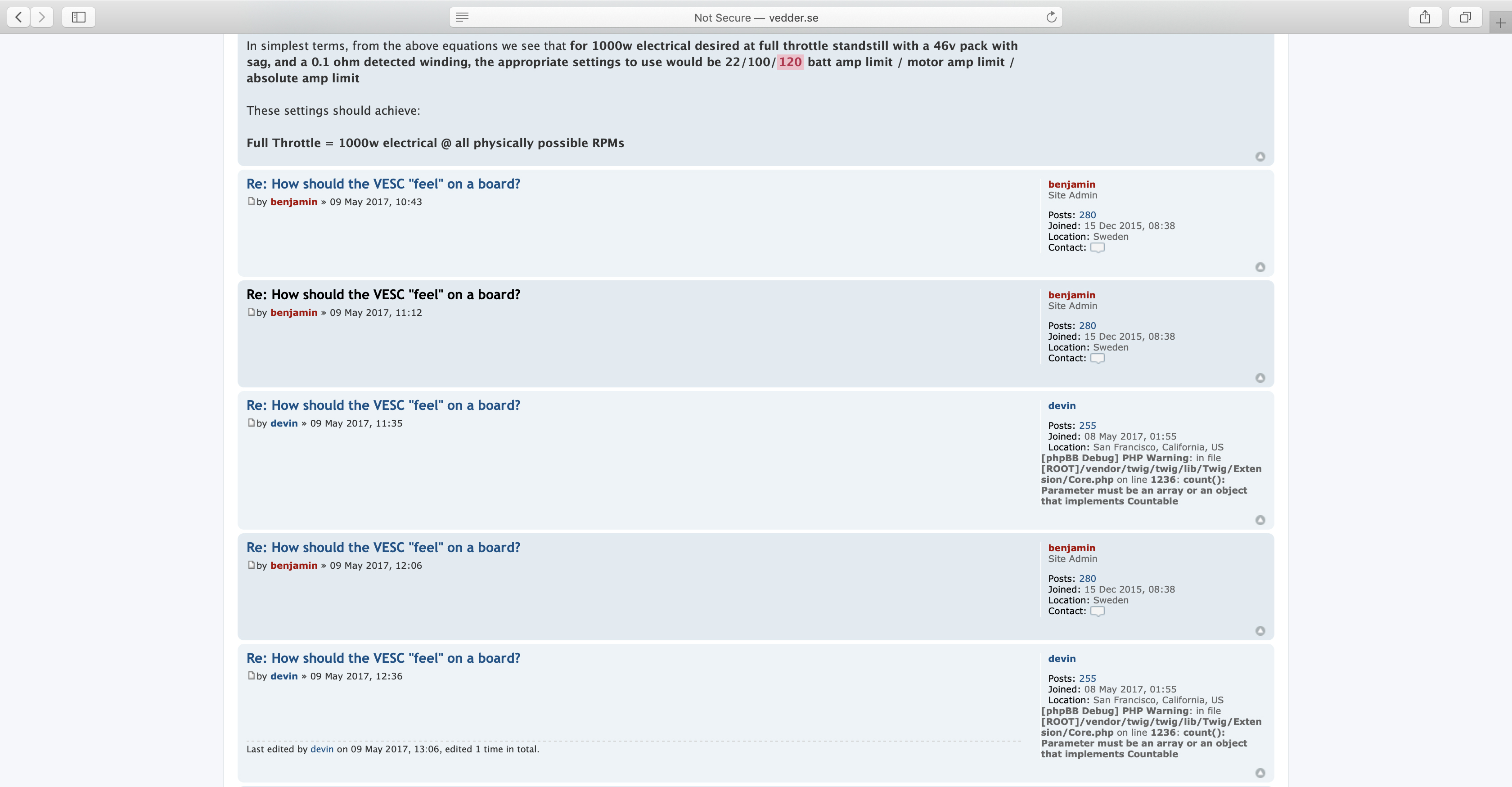 Hardware limits are defined in the hw_xx file of the firmware code. Depending on what the hardware developer put there, that would be your limit.